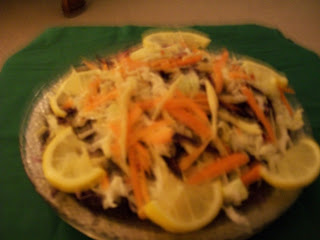 Combine all of the ingredients except Cilantro and Lemon slices in a medium bowl.
Mix and Toss.  Serve after fifteen minutes. Top with Cilantro only before serving.
Garnish with Lemon slices if serving in a platter. you can save the Lemon slices for future use in tea or something else if people don't use them.
Makes four half cup servings.

My husband said that I don't know how to make the sides that come with the fried chicken. I told him that I am working on it but Coleslaw is not a problem. He wondered if I had the ingredients for Coleslaw. I told him that I have the ingredients and then some. He said that no one can make like the one that comes with the Fried chicken, but he was willing to try my weird method. Vegetable oil being the only fat, versus cream and other fats in the other Coleslaw did not sound like Coleslaw to him. When he saw me chopping the green cabbage very fine, he asked me if I can chop the purple one ( meaning the Red Cabbage) a little thicker because it is hard to pick up very finely chopped Coleslaw with the fork.
He actually liked it. 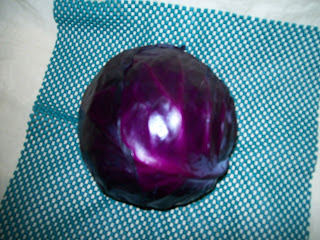 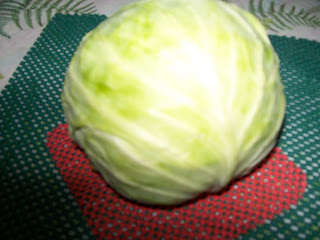 Posted by MunirGhiasuddin at 9:37 AM 138 comments:

Summer food before springtime
Chicken Kabobs in the oven

Combine all of the ingredients except Cayenne pepper in a resealable plastic bag and shake thoroughly until the chicken cubes are coated with the salt and garlic powder. Let stand for two hours. Take two ten inch skewers and thread the chicken cubes (Kabobs). Keep the skewers with the chicken kabobs. Keep the skewers with the Kabobs over a deep baking dish and broil for ten minutes. Take the Kabobs out and brush with the cayenne pepper. The Kabobs are ready to eat. You may want to squeeze some lemon juice if you desire. I like my vegetables fresh therefore I did not add any. You may want to add Pepper and or Tomatoes like I did with the other one. 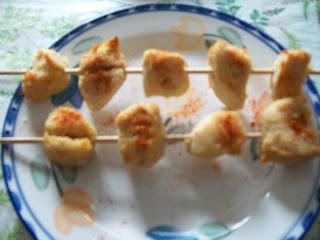 My daughter liked these a lot.
My husband was not really thrilled with these,
" Kabobs are only of Lamb or Beef." he said.
Therefore I tried these with a little alteration.

Beef Kabobs in the oven
One pound boneless Beef cut into sixteen pieces
Half a tsp salt
Two tsp Olive oil
four Roma Tomatoes  quartered ( sixteen pieces)
two large green Peppers cut into eight pieces
One large Zuchinni cut into sixteen pieces
One eighth tsp Cayenne Pepper
One tsp grated lemon peel
One tsp dried basil
one tsp dried Oragano
One fourth cup fat free Italian dressing.
In a large resealable bag combine all of the ingredients and shake. This time let it sit for four hours.
Then thread ten inch skewers with the Beef, Tomatoes, Peppers  and Zuchinni. Save the marinade in a bowl. Keep the skewers with the Kabobs over a deep baking dish and broil for fifteen minutes. Pull out the pan and brush the marinade over the Kabobs. Broil for another ten to fifteen minutes. Turn off the broiler and take out the Kabobs. Pour the rest of the marinade over the Kabobs. Bake for fifteen minutes on 350 degrees F for extra tenderness.
These can be grilled in summer time. The cooking time will be reduced to just fifteen minutes. However the time to marinade is still four hours. 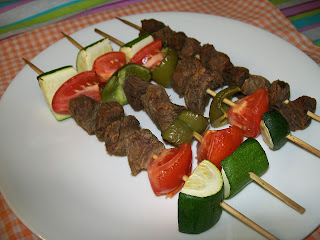 He has a choice of eating the Chicken Kabobs to his heart's desire or eat only one skewer of the Beef Kabobs.

What is closest to fried food in taste?
What would my father say? I used to go to my father with food questions because he worked in the king's kitchen from the age of fourteen. He would probably think for a few minutes and say that every dish has it's origin and is from a certain culture. I think that every dish has it's importance because of the numberof years it was served to a person or a group of people. Now a days, a certain food gets preference in our mind because of advertisement and constant reminders.
I have a huge task of competing with "ready to eat food" industry, when it comes to winning my husband's heart.
Younger people are flexible. They will get used to healthy eating eventually.
Posted by MunirGhiasuddin at 2:47 PM 15 comments:

Pink and Red For the Valentines 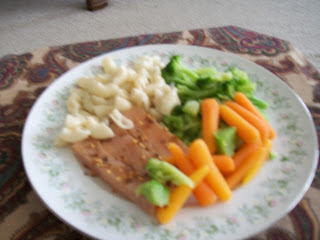 Pink And Red for the Valentines

Preheat conventional oven to 350 degrees F.
Wash the Salmon. Pat dry with Paper towel.
Mix the Salt and the Garlic Powder in the water. Pour this mix in an 8 x 8 x 3 baking pan.
Gently place the Salmon in the pan making sure that the water does not get on top of the Salmon. This will help the Salmon absorb the Salt and the Garlic powder rather than drying it out and burning the Garlic. Bake for twenty to twenty five minutes.
If there is no skin on the Salmon turn the Salmon after fifteen minutes only once.
Make sure that the water is all absorbed by the Salmon. This might take a little longer or even a little less time. The Salmon will cook as it is a very gentle fish.
Once the Water is absorbed , take the dish out. Make indentations in the Salmon either side ways or diagonally. Now pour the melted butter on top of the hot Salmon. Sprinkle the Red Crushed Pepper and the Basil .
Pour the Lemon Juice little at a time depending on your taste or eat by itself.
Serve with any side dish except for white Rice or White Bread.
I served mine with buttered noodles, steamed Broccoli and steamed Carrots.

I served Pink Lady Apples for after the meal cleaning of teeth. I do not serve dessert as yet. I still have to figure out a healthy way to serve sweets. 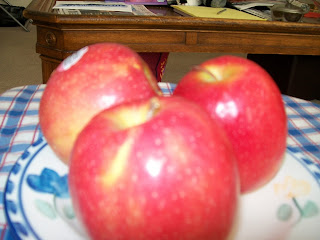 I know that my husband would rather have fried Chicken, Potato wedges and an Apple Pie slice but he just has to get used to the baked fish until I come up with a recipe for a healthy method of getting the taste of fried chicken. 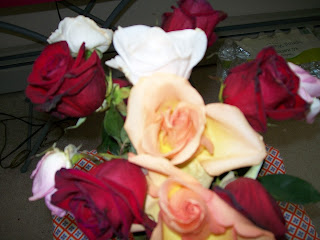 "I know that Pink and Red Roses are good to look at but Pink Fish is good for you to eat " I told my husband.
"I hate Salmon" he snapped.
"Tough" I snapped back. Then I softened a little. "How about some buttered noodles with it"
"Oh come on !" he was bored.
"Ok, then, - - - - we can talk to your Cardiologist about the fluid mechanics of the Cardio - Vascular System ?"

Posted by MunirGhiasuddin at 9:29 AM 4 comments:

I have always believed that recipes should be true to their ingredients from each gram of ghee ( clarified butter) to each grain of salt. However as we stepped in 1980 and from then on, there was a big awareness of dangers of butter and of salt all over the world. So, what was I supposed to do?  I started using margarine in place of butter in my recipes and then my husband started using it on his toasts in the morning and eventually we even used vegetable shortening in cookies and a lot of other baked goods.
A few years ago, it so happened that a loved one brought home a list of foods to avoid in order to lower cholesterol. That list had the words "hydrogenated fats"and foods containing hydrogenated fats.  So we checked every jar of peanut butter in our home and what do you know, they all had partially hydrogenated fats in them.  Then we checked the margarine tub, that too had the partially hydrogenated vegetable oils in them. Bad News? No not really. We now shop very carefully, read every single ingredient and have started using natural peanut butter and cooking oils like Canola oil, Olive oil and  vegetable oil. 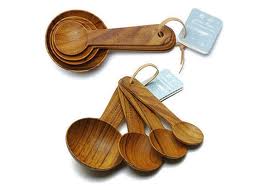 Now the question still remains. what do I do when I have to make recipes that require Ghee? I started using real butter, except that I use may be a tenth of the required amount and make up for the rest with oils. I used to be embarrassed about doing this, because this was the method used by either people who could not afford "Ghee" or by people who were extremely thrifty. Also a lot of other foods like brown rice and foods with a lot of fiber were used by servants in India. Today I not only eat simple servant  like foods I give them to my husband,( even if he yells at me).  I tell him that we have to get used to this lifestyle and be an example for our children and grandchildren. This life style of simpletons back home is what is good for us all.
Posted by MunirGhiasuddin at 5:33 PM 5 comments:

MunirGhiasuddin
Happily married. Proud to be a mother of three awesome kids, grandmother of three cute grandsons and mother-in-law of a wonderful daughter in law. Met some wonderful people while blogging.